The image of team sports as a metaphor for teamwork is as old as time for one simple reason: It works. The French soccer team didn’t win the 1998 World Cup because they had Zinedine Zidane to score goals (although that didn’t hurt). It won because the players worked extremely well together, so much so that Emmanuel Petit, initially a defensive midfielder, took over a center back position and even managed to score the iconic third goal of that legendary final.

Aligning the marketing and sales departments means taking very good midfielders and giving them the opportunity to pass the ball to the strikers who then score the goal. It’s about putting in place a common strategy to optimize collective efforts and thus improve results. In a nutshell? It is essential.

Marketing and Sales: Who does what?

To know how to work together in the best possible way, it is of course necessary to start by strictly establishing everyone’s roles. Who is responsible for what? How does it work?
Simply put, marketing teams are in charge of reaching out and engaging with potential leads, and sales teams then take over to close the sale. The roles seem relatively indistinguishable from each other, right? And yet, it’s not uncommon in a company for the two departments to be separate and not communicate. Worse, they can even go so far as to blame each other when the results are not good: The former did not select enough prospects before passing them on, the latter did not take advantage of the available opportunities … Their objectives are different, the role of each is not clear and synergy is unfortunately too rarely there.
This synergy (nicknamed “SMarketing” by some) is still essential for the smooth running of the company, especially in the B2B sector. So how do you get everyone on board? If we keep the image of a team sport, it is “simply” a matter of finding a common goal and planning how to achieve it.

SMarketing, yes, but how?

It’s often said here, but it all comes back to the Customer Experience. A successful business today is a business that keeps in mind that the most important thing is the customer. In marketing, this means sending interesting content at the best time and in a non-intrusive way so that the prospect becomes more and more interested without being harassed. When sales takes over, care must be taken to avoid redundancy or repetition – bringing up this or that topic already presented by marketing risks annoying the prospect more than anything else. That’s why it’s important to correlate the platforms used by each, especially CRM and Marketing Automation so that each has a global view of the consumer.

Define the strategy together

From the choice of KPIs (key performance indicators) to be used to measure performance to the definitions chosen by all (what is considered a lead? A prospect? What kind of conversion are we looking for? …) and a common scoring (at what stage does a lead become a prospect? When is it passed on to sales?), the teams must understand and assimilate each other’s actions in order to evolve better together. Of course, a strategy would not be complete without a common definition of the customer journey.

Passing on the right information

To successfully convert the prospect during the transition from one team to another, it is crucial to transmit the relevant information so that sales have the maximum chance of success: the score, the marketing actions that have succeeded in reaching the prospect (emails opened, white papers downloaded, webinars attended)… 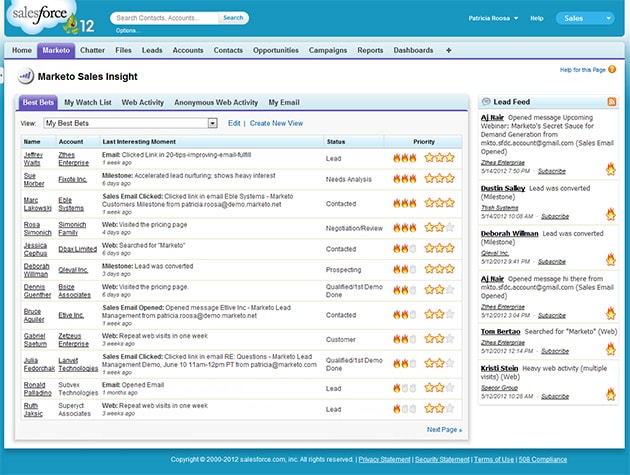 In the example above, we can see how sales can see in its Salesforce solution the marketing actions coming from Marketo: the news flow, the best leads classified according to their degree of importance and urgency, the score, the interesting moments, the programs in which it has participated…

Personal branding of a salesman

Last but not least, the importance given to content by marketing helps sales teams to set up their personal branding, thus becoming ambassadors of their brand by sharing quality articles according to an editorial line and scenarios defined in advance.

And one! And two! And three-zero!

For the past 20 years, Sylvain has been choosing and assembling the best technologies for his key account clients, to help them create a successful end-to-end customer experience. Surely the Leonard of the team, he is a fan - and expert - of Marketo! He sits next to his clients, drives them forward and makes Marketing Automation projects succeed with his team.